The Diaries of Jackson Davis

The Special Collections Department holds the volumes of Davis’ diary for 1911 and 1913, which are gifts of Sally Guy Brown and Helen Langhorne, Davis’ granddaughters. These early diaries contain information about Davis’ work as field agent for Negro Rural Schools in Virginia and occasionally include personal comments and details. Unfortunately, Davis notes in these volumes are often extremely terse; frequently he merely notes that he was “in the office,” or at a particular Virginia school. His longer entries often comment on individual teachers and students as well as giving details about specific schools and their programs.

Both the 1911 and the 1913 volumes of the diary are available online (encoded in TEI-conformant SGML) as searchable electronic texts. 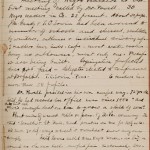 Other electronic texts from the Jackson Davis Collection